Allegiances & Convictions explores the American flag as a malleable symbol of ideals, promises, and identity. June Edmonds's new Flag Paintings create space for the inclusion of multiple identities including race, nationality, gender, and political leanings. Each flag is associated with the narrative of an African American, past or present, a current event, or an anecdote from American history. Edmonds investigates the complexities of these stories through the creation of new symbols for Americanness.

Color has played an especially important role in the intersection of Edmonds's personal, political and artistic journeys. Color associations can be tied to culturally symbolic imagery, trauma, and emotion,

giving color the unique discursive ability to communicate about power and systemic disenfranchisement. The Flag Paintings explore the psychological construct of skin color utilizing the primary colors of brown skin tones to build Edmonds's radical propositions: symbols of American identity that not only more accurately reflect the broader changes in the racial and ethnic makeup of the country's population but the ideals and promises enshrined in the Constitution. With thick, shifting brushstrokes in rich earth colors organized into columns of varying widths, the flags rise vertically, like human portraits. On this, Edmonds's states: "These flags are standing for something - so I'm gonna keep them standing." 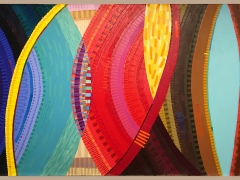 When tasked with defining America, the forefathers of this country attempted to create a union that, though forged in rebellion to an oppressive regime, was ultimately funded by slave labor. By declaring this land a union where all men are created equal, only to deny representation and basic civil liberties to all who are not white men, the framers of our constitution bequeathed to us a contradiction that we are still working to correct today. Almost 250 years later, with the divisive nature of our political system and a multitude of bifurcation points within each party, it seems that defining the American identity has become nearly impossible.

A flag, any flag, is the very definition of a symbol, a thing that exists in the service of what it represents, such as a nation for example, or a movement. At the same time, a flag is also a color story, a designed image, and a made object. The American flag in particular enjoys status as both image and object as well as symbol. Its distinct patterns are perhaps the most recognizable and narratively fraught in the world. Laws prohibit its physical destruction, but not its use as elements of corporate logos, fashion items, and superheros.

Jasper Johns famously attributed the origin of his iconic painting of the American flag to a vision he had at night; likewise, June Edmonds arrived at her first stroke-by-stroke reconstitution of a flag through a dream she had in 2017, after she returned to her home town of Los Angeles from a residency in Paducah, Kentucky. In her case, though, it wasn't about the same stars and stripes; during her residency, while driving to Memphis, she had seen a wall-size Confederate flag—a looming, unapologetic beacon still standing on the Southern hillside—to which she later responded in a series of paintings.

June Edmonds, Allegiances and Convictions, at Luis De Jesus Los Angeles. An exhibition by the L.A.-based painter dwells on the significance of flags — both as visual statements and tokens of identity. In this case, each of her flags pays tribute to African American history past and present.

View LATIMES.com
Back To Top