Kaucyila Brooke
Latourell Falls CU (from the series The Last Time I Saw You), 2012
Chromogenic print
40 x 30 in.

Kaucylia Brooke
Latourell Falls LS (from the series The Last Time I Saw You), 2012
Chromogenic print
40 x 30 in.

The title of this exhibition is borrowed from the William Wordsworth's poem Descriptive Sketches, published in 1793 and written during the aftermath of the French Revolution, the end of the Age of Enlightenment and the onset of Romanticism--which started as a reaction against intellectualism with its thralldom of the senses, the sublimity of nature and the exotic. The Crash of Ruin Fitfully Resounds poetically resonates the present-day loss of the idyllic with works that oscillate between projection and perception, coherence and chaos, discovery and loss, post-modernity and what the future holds.

Mara De Luca's work is a reflection on contemporary mass media expressed though the diverse pictorial, conceptual and technical conventions of abstract and representational painting.  Her work from the new Elegies series gestures toward the natural landscape and visual culture of Los Angeles. Based on Rainer Maria Rilke's Duino Elegies, the series comprises ten painting "types".  These diversely structured paintings cross-pollinate Minimalist abstraction with Romantic tropes--dramatic skies and heightened lighting effects that emulate the chiaroscuro of that period. Borrowing the color palette and lighting pattern from mainstream advertisement sources (in particular, the recent print ad campaigns of Gucci, Dior and Chanel), De Luca simulates contemporary fashion advertising's take on the sublime.

Kaucyila Brooke's work is concerned with the mechanisms of power and representation and asks what possibilities exist for the individual to interrupt the dominant cultural codes.  Her photographic series The Last Time I Saw You depicts waterfalls from the Columbia River Highway in Oregon. Brooke's proffers a new perspective on the perception of landscapes, gardens and 'natural' phenomena, fundamentally challenging the category of nature itself.  Taken with a large format camera, exposures of half a second fail to capture the details of the water's fall resulting in a blurred white shape. The work is a farewell that is both personal and a valediction to the medium--analogue photography, a vanishing technology.

In The Border Series paintings, Tony de los Reyes combines the demarcation of space through a conceptual framework, and its resulting material manifestation, with the delineated spaces on the US-Mexican border.  This demarcation or "border" is caused by an "encounter" of paint or pattern that utilizes specific materials and processes to organize otherwise incoherent space.  This can be addressed as site of politicized abstraction- the mapping of landscape and border is contemplated in the "push and pull" process inherent in abstract painting.

Jennifer Boysen begins her art-making process with the concept of painting as landscape with no direct association to any particular visible experience.  Underneath the layers of paint overlays, there is a pictorial image that is obstructed, with a slight reveal through the process of scraping and scratching the surface, which upon viewing invites a visceral memory.  The resulting evidence of these painting gestures and techniques are suggestive of other media such as photography, sculpture, or digital media.  With the slightly concave shape of the canvas, the viewer is pulled into the "still point" of the painting, a place of meditation and immersion, much like being in nature.

Christopher Russell employs photography, bookmaking, writing, drawing, and digital-media printmaking to illustrate his explorations of the darker side of the human psyche.  His manipulated photographs are scratched into with intricate drawings of ships, trees, landscape and repeating patterns that relate to longing for and domestication of new experiences--an unending desire for the unattainable.  Steeped in historical references, his embedded narratives are elegant evidence of resilience and destruction.  Using the modernist association with beauty, his work lures the viewer into darker, contemplative places-a romantic world emerges.  Russell's use of hybrid photographic forms is an experiment in poetic strategies, adding layers of meaning and possible interpretation.

Drawing attention to the construction of the work of art, Analia Saban dissects and reconfigures basic elements of art-making, finding new constructions that blur the boundaries between painting and sculpture, painting and photography, image and object, while challenging the viewer's notion of traditional artistic media from the annals of art history.  Revisiting "some clichés of painting, and even some of the beautiful moments, like Minimalism," Saban embraces the experiential aspects of process art, with an acceptance of the inevitable without bias towards success (or failure).

Ken Gonzales-Day's interdisciplinary and conceptually grounded projects consider the history of photography, the construction of race, and the limits of representational systems ranging from the lynching photograph to museum display.  Using the sculpture and portrait bust collections of several major museums his series, Profiled began as an exploration of the influence of eighteenth century "scientific" thought on twenty-first century institutions ranging from the prison to the museum.  A photograph taken in Frederick the Great, King of Prussia's summer palace Sanssouci (which from the French translates as "without concerns"), depicts the bust of a Moor paired with a torso of Pan, as if to quote Voltaire's Candide, 'Il faut cultiver le jardin'(the garden must be cultivated).

Nena Amsler creates work that resists being slotted into traditional categories like sculpture or painting, decoration or craft, referencing surrealism to digital photography to the history of abstract painting.  As a counterweight to contemporary times, she seeks to explore light and awareness of ancient times, such as the wisdom of the Middle Age mystics and the insight of indigenous cultures, specifically Peruvian shamanism.

Like objects in the real world that have no intrinsic reality, the paintings in this series are fictions, fabricated of plastic (acrylic paint), a malleable material with no intrinsic form. By literally making the detritus of nature and society out of paint, and bringing the "ground" up to eye level, Amsler seeks to obtain clarity and meaning for herself, and hopefully the viewer.

Christian Keinstar, a Polish-born artist from Cologne, creates sculpture, photography, installations and performance that deal with visibility.  He uses the "big gesture" to create shifts in our perception of reality and the world, drawing attention to usually unnoticed things while raising questions through reinterpretation, alienation and provocation.  Keinstar's Dropped can be seen as a commentary on California's mythology—a land of images, both the dream factory, but also the dry riverbeds and raging firestorms.  Here, a small aircraft used to quench brushfires unloads a red liquid into an empty swimming pool somewhere in the vast California desert.  The massive red chemical cloud, luminous and threatening, that descends upon this iconographic symbol of Hollywood becomes a powerful visual metaphor for the precarious balance of existence and the conspicuous loneliness of stardom. 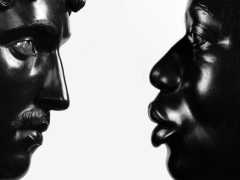 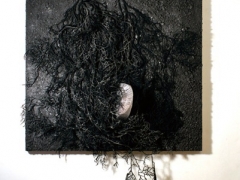 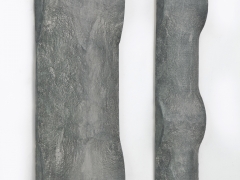 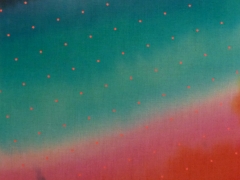 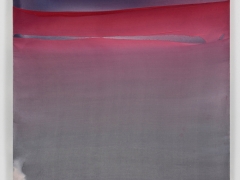 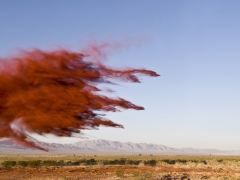 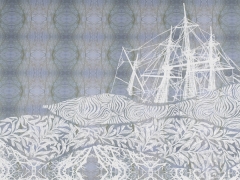 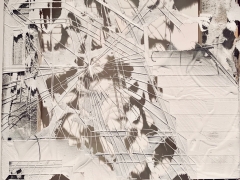 Analia Saban
Back To Top