Ebony G. Patterson
...they were beautiful like the moon... they were just babies... they were just girls... (...when they grow up), 2016-2018
Hand-embellished jacquard tapestry, beads, glitter, appliqués, embroidery, tassels, trim, rhinestones, buttons and hand-cut elements with broken metal and plastic trophy heads, and hand-cast balloons
108 x 36 x 96 in

lisa c. soto
My broken bridge, the gap in you saddens me, makes me want to repair you, repair us. Layers of our stories,our truths, our heartbreak embedded in my magnetized lines. All of our joy and pain compressed into these knots. How do we bridge this gap? Let’s create a path above this ocean. Let’s create a force field., 2018
Magnetic tape, copper, brass wire
336 x 8 in.

Deborah Roberts
The Intrusion, 2018
Collage, gold pigment, and paint on paper
30 x 22 in

At a time when people across the globe feel increasing discontent and there is great unease about the future, the artists in SOUL RECORDINGS present works that address a number of social and political issues underlying some of these conditions, offering personal responses filled with poignancy, confidence, strength, and resilience. Culled from a multinational and cross-generational landscape, these artists explore the roots and context that shape their work through a broad range of perspectives and media. In the process, they share their own stories, reclaim appropriated culture, and forge a path through empathy and resistance. For them, the personal is political. SOUL RECORDINGS challenges us to contemplate difficult questions—and these artists invite us to listen to their multivalent answers.

Bronx-based Lex Brown is an artist, writer, and performer whose work creates interplay between personal and emotional experience in relation to large-scale systems of social and economic organization. Brown's recent work considers the intersection of pre-fab neocolonial architecture and the aesthetics of the first e-commerce boom as a backdrop for upwardly mobile Black family life, of which she is a product. Brown states: "In the process of dismantling my own internalized racism and sexism, I build new characters, worlds, and linguistic relationships. The work reaches the viewer through an experience of variance: fluctuations between humor and seriousness open up a space for personal connection and examination."

Brooklyn-based Caitlin Cherry combines painting, sculpture, and installation with references to history and political current events. Kara Walker, after working with Cherry during her MFA at Columbia University, has said that Cherry's work "break[s] apart the rules governing painting and sculpture, and tease[s] that unsettling sweet spot that disarms viewers' expectations." Case in point, Cherry's portraits present a codified idea of achievement that questions and reshapes cultural notions of race and success. Distorted like comic-book characters on steroids, suggestions of racist stereotypes that might be implied by exaggerated facial features are combined with serious attitude and humor as each subject oozes a knowing awareness and rejection of objectification with style.

Kentucky-based, Jamaican born multimedia artist Ebony G. Patterson confronts issues of gender, race, and class through sprawling installations that often reference real and specific acts of violence against people of color. Patterson's affective tapestry, titled ...they were beautiful like the moon...they were just babies...they were just girls... (...when they grow up), 2017, is colorful and festive with competing patterns and elaborate beading -- at first glance, reading as celebratory, perhaps a children's birthday party. The titular "girls," however, are riddled with holes and shinny blood-red Mardi Gras beads drip throughout the scene. As viewers, Patterson's work forces us to become aware of our ability to witness.

Austin-based artist Deborah Roberts creates visually arresting collages and prints that encourage conversations about girlhood, vulnerability, body/self image, popular culture, and the legacies of racism. Combining found photographs, painting, text and drawing, Roberts challenges the myths and stereotypes attached to young Black girls. Roberts' multifaceted collages feature figures that eschew cliché, instead opting to build their own complicated subjectivities from multiple sources and exemplifying the complexities of Black identity. Roberts states: "I believe having ones identity dismantled, marginalized, and regulated to non-human status constitutes action. This led me to making confrontational-based work that challenged the notions of self and perceived self."

Brooklyn-based, Jamaican born artist Paul Anthony Smith makes paintings and photo collages that utilize abstraction, patterning, and disruptive surface techniques to discuss problematic notions of memory in relation to photography. Using appropriated images of the Caribbean alongside his own "non-tourist" photographs taken on personal visits, Smith is best known for his picotage, a technique of scraping and picking up layers of a printed photograph. This violent action enacts irreverence towards a medium often mistaken as a stand in for truth. In Smith's Grey Area works, muted colors frustrate expectations of sun-drenched tropical hues. Here it is the mediation of photographic pictures through the silkscreen that lends the work a kind of graininess, a veil that breaks up the image while building up a resistant, complicated object.

Chicago-based, Puerto Rican born Edra Soto is an interdisciplinary artist, educator, and curator who creates symbolic gestures of colonization and subjugation, prompting viewers to reconsider postcolonial visual culture. Soto presents a sculptural excerpt from her ongoing project OPEN 24 HOURS, a socially-engaged work that incorporates the collection of discarded liquor bottles during the artist's daily walks through East Garfield Park, a historically Black and neglected neighborhood in Chicago. Cleaned and label-free, the bottles are presented as an archive of the community's consumption (and the fascinating history of cognac within the African American community), using a display form inspired by Puerto Rican vernacular architecture that combines decoration, comfort and security.

Born in Los Angeles, lisa c. soto grew up in New York City and in a small traditional village in the South of Spain, across the waters from Morocco. Her Spanish-Afro-Caribbean heritage and continuous movements between continents and islands have informed her themes, providing her a unique, global perspective. soto's drawings, installations, and sculptures embody the struggle between connections and disconnections, using tension as the driving aesthetic principle. soto's experiential installations made from wire, bullet shells, Mylar, hardware, wire mesh, mirrors, and other industrial materials, strive to convey the energy transmitted by our global and intimate relationships. Soto questions our endless conflicts, our creation of artificial differences, and our establishment of borders.

Delaware-based artist Peter Williams paints from personal experience, creating bodies of work inspired by communities he has lived in throughout his life, such as Black Cowboys in the southwest, contemporary Black memorabilia and stereotypes in Detroit, and a Black superhero known as The "N" Word. The violence of contemporary Black life in America and the myths and heroes that are formed in public perception are currently discussed in Williams' more recent works. In one painting, the Adonis-like and contemplative head of Colin Kaepernick is surrounded by the names of Black Americans destroyed by police violence. Williams states, "my sense of negrossity is one of empowerment," ascribing a studio practice that aims to bear witness to evil while inspiring hope. 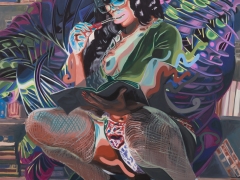 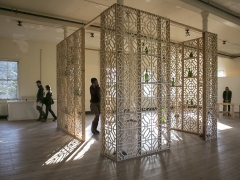 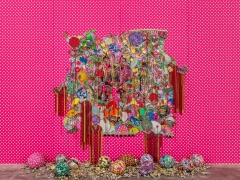 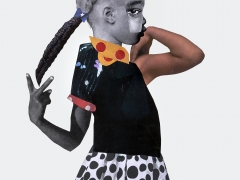 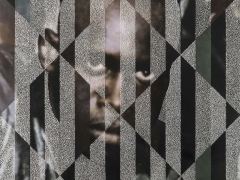 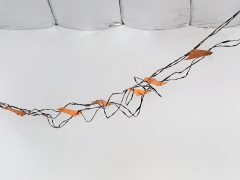 News media, despite respective biases, seem to agree in the description of contemporary politics as  “complicated” and “divided.” While accurate, this semantic admission fails to demonstrate the accountability of the status quo. Soul Recordings, a group exhibition currently on view at Luis De Jesus Los Angeles, examines ideas around representation and meaning amid the persisting trauma of colonial histories.

The opening movement of “Soul Recordings” is a polka-dot revelry, a bedazzled wake-up call, a cymbal-clap altarpiece, a plastic-bead trumpet blast, and a monster of a skull-ringed, glitter-bombed orchestral chord breaking in fuchsia major. This is Ebony G. Patterson’s heartbreaking and eminently Instagrammable mixed media installation work, and the poignant grandeur of its regal and folkloric memento mori is alert and ineffable.