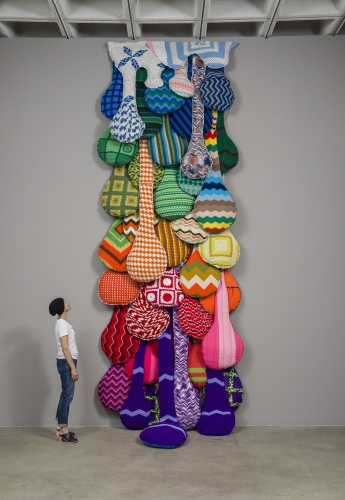 Miyoshi Barosh used the vernacular traditions of craft and folk art to make her wall tapestries, paintings, and sculptural objects. The current economic crisis has added relevance to Barosh’s recent body of work centered on ideas concerned with cultural failure (the failure to make life better) and its impact on the individual.  Her use of myriad materials such as fabric, Plexiglas, foam, fiberglass, paint, and found objects, as well as craft processes are a refutation of ideas of progress.  Acrylic yarns and thrift-store purchased polyester knitwear are used with both comic irony and heartfelt sincerity as an Americanized arte povera.  These “indigenous” fabrics and folk-craft techniques are then processed through accumulation and assemblage in opposition to male-dominated Modernism as well as a parody of aspirational consumerism.

The text and titles of many of Barosh’s pieces—Feel Better, Reflecting Our Fevered Dreams and Desires, Rescue Chair with Soft Intervention—point to a shift in responsibility to create and sustain meaningful lives from society to the individual.  Cultural failure becomes internalized within the individual who turns to self-help books and articles, conventional therapy, as well as prescription and non-prescription pharmacology.  The texts in the work signal a call for action: the action of becoming “better” and questions the role of texts in the formation of selfhood.  Through material, process, and text, Barosh made the art object a manifestation of competing emotions around cultural conceits and identity politics.

A native Los Angelino, Miyoshi Barosh received her MFA from California Institute of the Arts and BFA from Rhode Island School of Design. She also attended Yale Summer School of Art and Music (1980) and Parsons School of Design Summer School in New York City. She was awarded a 2015 Guggenheim Fellowship for Fine Arts and was a 2015 C.O.L.A (City of Los Angeles) Individual Fellowship awardee. She was an artist-in-residence at the Pilchuck School of Glass and was the first artist-in-residence at the New Children's Museum in San Diego.  Barosh has participated in numerous solo and group exhibitions, including Body Conscious: Southern California Fiber at the Craft in America Center, Women, War, and Industry at the San Diego Museum of Art, The Small Loop Show (curated by China Adams) at the Fellows of Contemporary Art in Los Angeles. Cheerful and Heroic: Eight Perspectives on the Art of Failure (curated by Lauren Lockhart) at Southwestern College Art Gallery, and We’re Not Here to Waste Time! at Luis De Jesus Los Angeles. In addition to being an artist, Miyoshi Barosh has worked for numerous art publications, including BOMB magazine, where she was managing editor.  She was founder, editor, and co-publisher with A.R.T. Press of NOW TIME, a non-profit arts and culture journal based in Los Angeles.  At A.R.T. Press, she worked with William Bartman, publisher/editor, worked on book-length interviews with mid-career artists such as Allan McCollum, Vija Celmins, Felix Gonzales-Torres, and Mike Kelley. 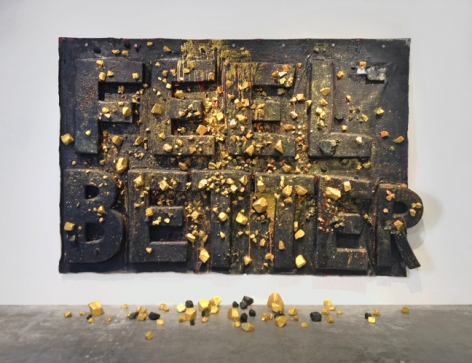 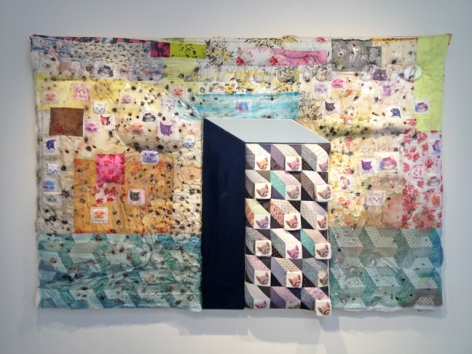 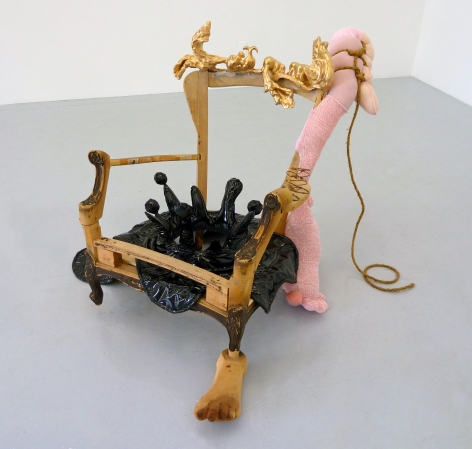 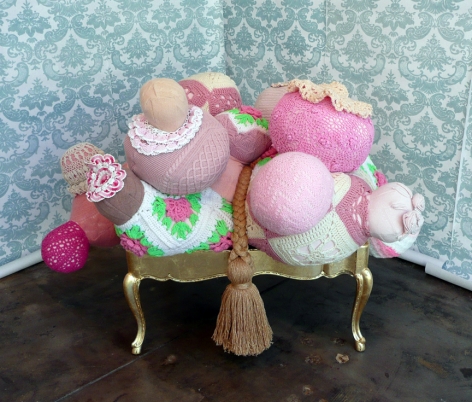 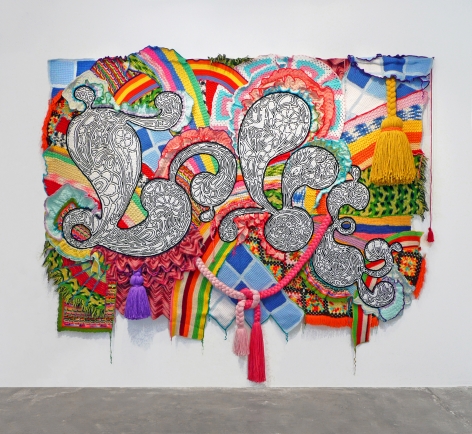 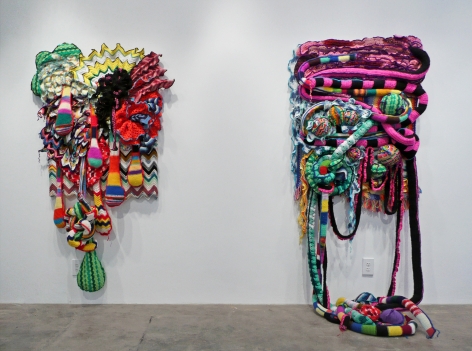 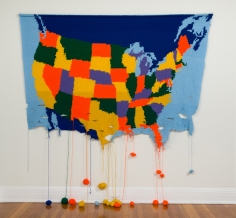 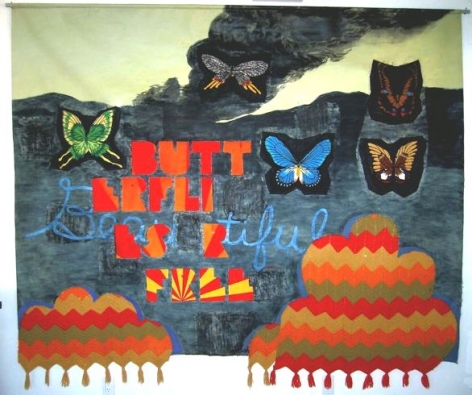 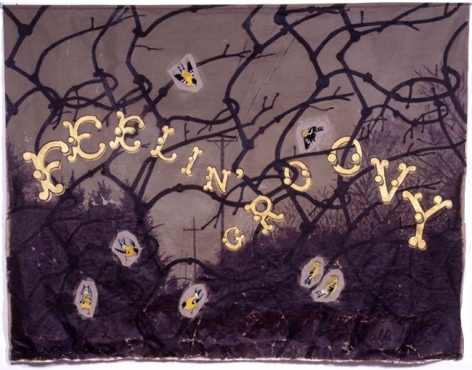 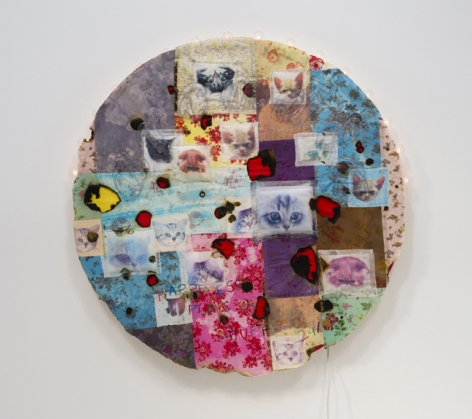 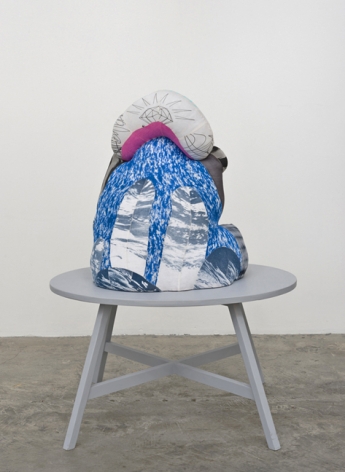 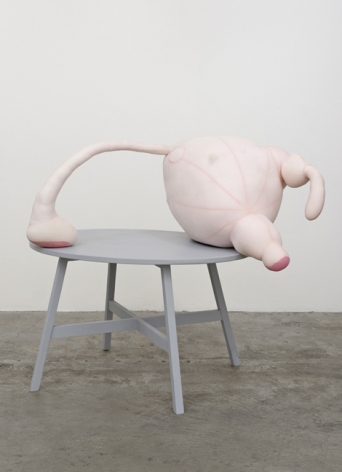 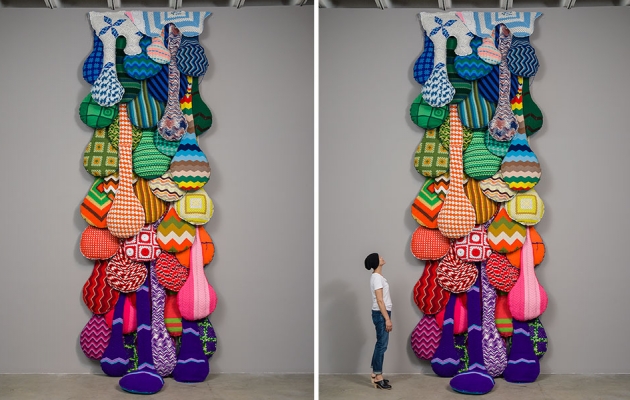 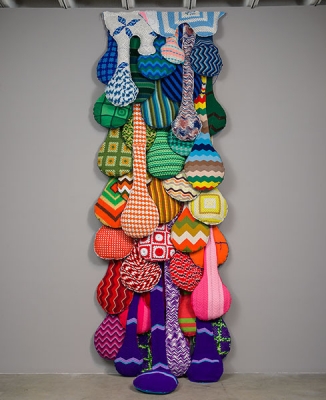 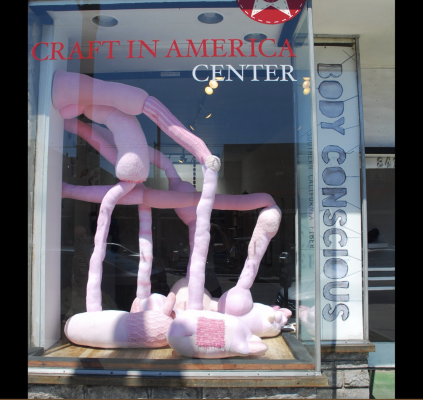 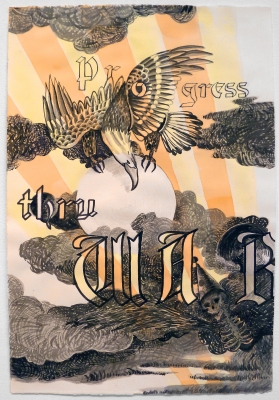 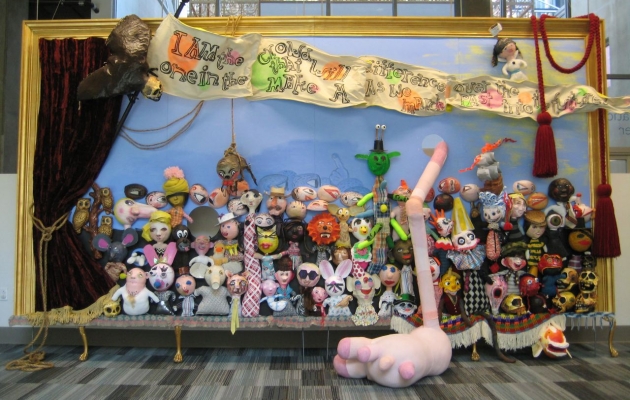 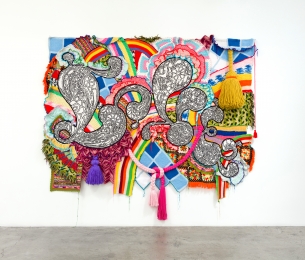 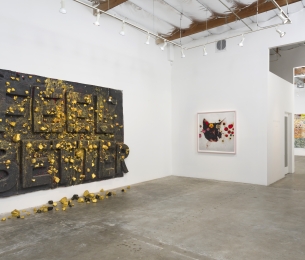 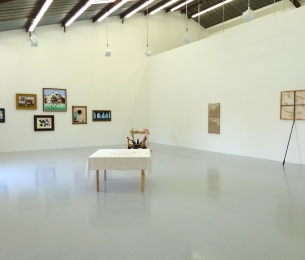 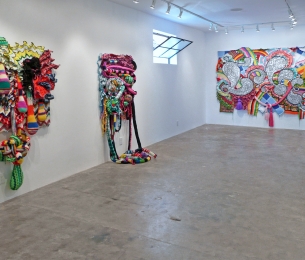 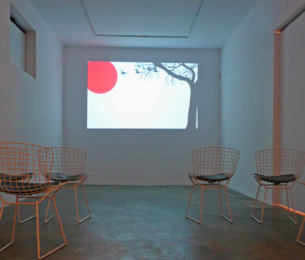 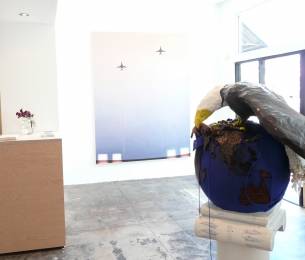 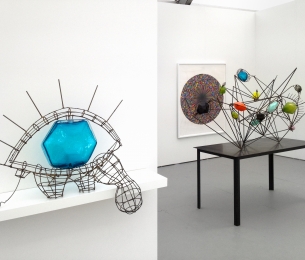 Sometimes a sausage is just a sausage, but not in Miyoshi Barosh’s archly adorable world. Her kielbasa-shaped glass sculpture, Untitled (Sausage) from 2015, gleams suggestively from a vitrine at Luis De Jesus Los Angeles. In case you doubt its Freudian implications, its cellmates are a penis and a pair of breasts, also made of glass, both trussed with twine as if ready for the oven. The vitrine’s fourth occupant, Untitled (Meat), is a smooth hunk of reddish-brown glass, tied up like a small ham. Equating body parts with meat is nothing new, but these works put a sharper point on Barosh’s more prominent work in textiles, which tends to be exuberantly domestic and slightly macabre.

View LATimes.com
ARTNET NEWS
HERE ARE 6 ARTISTS YOU MIGHT NOT KNOW, BUT SHOULD - WITH SHOWS YOU CAN SEE THIS FEBRUARY February 5, 2020

In the early 2000s Los Angeles-based artist Miyoshi Barosh started making large-scale textile sculptures that combined the intimacy of craft with the bold, irreverence of Pop. Though vibrantly colorful and often playfully ironic, a dystopian sense of decay and death characterized these pieces. After the artist’s untimely death last year, the artworks have taken on new poignancy; they’re spirited, contradictory, and full of mischief and the carnivalesque madness of contemporary life.

Three local galleries are honoring the groundbreaking artist and L.A. native with simultaneous exhibits: Before she succumbed to uterine cancer last February at age 59, artist Miyoshi Barosh spent the better part of three decades cultivating an art practice that was compassionate yet contrarian, conceptual yet craft-made, and Pop yet profoundly personal.

Throughout L.A., three galleries have teamed up to honor artist Miyoshi Barosh, who passed away last year. Barosh’s fiber-based work is exuberant and joyful. LOVE!, one proclaims, next to a giant oversized yarn tassel. At Night Gallery, a collection of pink oversized and fabric cartoon legs called Large Legs spew off the wall. At Luis De Jesus, I ♥ Kitties is a photograph of a cat’s head, embellished with embroidered patches. While this all might sound saccharine, Barosh’s work intentionally tugs our heartstrings to get at larger messages of consumerism, ecological failure, and social control. By using techniques associated with “woman’s work” and a cutesy aesthetic, Barosh slyly pokes at our associations with each, while uncovering a rawer, more unnerving element underneath.

Luis De Jesus Los Angeles announced the opening of two new galleries, “The Earth is a Brush” and “Love,” on Saturday, Jan. 11.

Margie Livingston’s “The Earth is a Brush,” the artist’s fourth solo exhibition with the gallery, will be on view through Feb. 15. Miyoshi Barosh’s “Love,” the late artist’s third solo show with the gallery, will also be on view through Feb. 15. Her work combines humor and dystopian irony in a style she dubbed “conceptual pop.”

Her work is centered on ideas concerned with cultural and individual “Failure” (the failure to make life better), Utopia, and Ruins. Materials such as fabric, glass, steel, Plexiglas, foam, fiberglass, paint, and found objects together with fabrics and yarn are used with both comic irony and heartfelt sincerity, pointing to both material and emotional excess. The uses of vernacular craft processes and folk traditions in combination with digital technologies contradict ideas about progress and technological determinism. While socio-economic questions are raised around ideas about authenticity, labor, and value in the use of craftwork, value is also seen as a projection of ourselves onto things, like cute animals on the Internet, mythic American landscapes, and the built environment.

It says a great deal about the post-genre moment that these works would be at home now in a range of sculptural contexts, even if, for instance, the use of pantyhose was a dramatic, disjunctive move when Senga Nengudi first started engaging with it decades ago. There are striking pieces here using fake fur and innertube rubber (Victoria May), vinyl (May Wilson), industrial felt (Lloyd Hamrol) and found afghans (Miyoshi Barosh). Allusion to the body is one through line, many of the soft surfaces evoking skins, pelts or protective coverings. Contrasts between the animate and the mechanical, the organic and the industrial, is another.

There's sculpture that requires viewing from multiple angles, then there's the kind that stops viewers in their tracks. In artist Miyoshi Barosh's case, audiences are compelled to do both. Her inexplicable, intriguing creations are fashioned from unpredictable stuff such as yarn and cast-off clothes, as well as more "traditional" elements including paint, steel, glass, and more. But the aesthetic arrangement of unconventional raw material yields methodically rendered artworks with a conceptual core. Wry, dystopian undercurrents lurk in the various textures, patterns, and forms all waiting to be teased out.

Last Saturday (September 13) at the Craft in America Center, Miyoshi Barosh shared a retrospective of sorts at our open house in celebration of the Body Conscious exhibition. Here’s a few photos from the talk and open house.

Google “feel better” and 130,000,000 suggestions for attaining happiness pop up in 0.24 seconds.  If the American Dream is working, why are so many of us overdosing on sugar laden treats or seeking joy in the endless line-up of adorable pets that populate You Tube? Miyoshi Barosh opens her examination of this conundrum by confronting us with “Feel Better,” a mattress-sized wall sculpture of a chocolate bar flecked with gold, imprinted with its title, commanding us to improve our emotional state. This humungous symbol addressing the pitfalls of destructive consumption is in a face-off with four digital prints of adorable kitties across the room.  A scattering of burns revealing underlying collages of colorful printed fabrics mars the kittens’ irresistible faces.  In an adjoining room, Barosh’s “Arcadia” is a standout adaptation of crazy quilt fabrics into a folksy 3-dimensional suggestion of computer gaming landscapes. Re-interpretations of vintage post cards of scenic America with titles such as “Monument to Manipulated State of Well Being” reinforce sculptures including “Monument to the Triumph of the Therapeutic,” emboldening Barosh’s captivating examination of a variety of ways in which cultural failure has become internalized. - Diane Calder

FEEL BETTER: The exhortation, wish, or command, chiseled in “stone” calls to me in huge upholstered capital letters from what looks like a black vertical gravestone in relief hung as a tapestry on the wall. On it and on the floor are shiny gold-colored nuggets or “rocks.”

Miyoshi Barosh’s 2013 installation concentrates in one piece her deft use of linguistic slippage, and the dark humor of double entendre. Through the intense materiality of language-as-sculpture, the work activates a kind of monumental craftsmanship that oscillates between the fleeting virtuality of a Facebook “wall” and the timeless finality of a tombstone. That the work is made of illusionistic movie prop materials (fabric, paint, foam, fake gold) adds to this collision.

The clash produces in the viewer a Brechtian estrangement effect, as when we are obliged to stand at a certain distance from the work, a distance that prevents us from being sucked in by the face value of language or the seduction of workmanship in the materials alone. According to the philosopher Ludwig Wittgenstein, “words are deeds.” Language 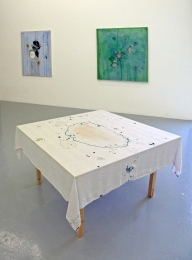 The three artists in this exhibition––Nena Amsler, Miyoshi Barosh, and Nava Lubelski––make works that resist being slotted into traditional categories like sculpture or painting, decoration or craft. Materially and visually, their pieces exhibit permeability or seepage—holes, drips, and stains figure prominently throughout—indicating a space where one object or concept blends into or creates a dialectic with another. These artists’ material-conceptual investigations invoke the relational perspective of the French feminist philosopher Luce Irigaray, who writes in her 2008 bookSharing the World, “It is no longer a question of moving in a space arranged by the words of only one subject, but of taking the risk to open one’s own world in order to move forward to meet with another world.”

Amsler uses extruded acrylic paint to create latticelike structures that extend across geometric surfaces on walls in organic webs that often drip or cascade onto the floor. They seem to repel the imposition of boundaries with a quiet subversion akin to lichen overtaking rock. Lubelski’s graceful and moody embroidered textiles explore the value ascribed to one item or experience over another, such as new and old, present and memory. Her stitched designs on used fabric, including a stained tablecloth from a dinner with friends, elevate accident and remainder, that which is leftover or rejected, to art via a decorative practice. Barosh’s sculptural chairs sprout an array of armatures—shiny black drips, metal coils, and foam protuberances—suggesting both the exuberance and the violence of growing outside or through limitations and constraints.